﻿Here you will view each current guest and learn what they are up to as well as viewing pics and videos of the current month's dog games. We also post pictures and videos on our Facebook page.﻿

Note: Moving forward (from 11/25/21) we will only be posting blogs and pics of dogs we're training, or are otherwise involved in activities such as swimming, hiking or showing. If you want pics of dogs who are here for only boarding there will be an additional fee of $15 per picture session as it's time consuming. Note: Often, however, our play yard videos (on Facebook) will feature all of our K9 guests; even those who are not scheduled for additional activities.

Bella and Tinker arrived yesterday afternoon. They quickly settled in and made friends. Today we went on a hike. Tinker is pulling hard on the lead so I'm getting to work with reteaching her the loose lead walk and stays, too. Bella is perfect.
​8/13: The girls had a great hike today. Tinker is catching on again and learning to not pull as we walk. She's also beginning to sit for attention and at gates/doors as well as perform some short stays. Again, Bella is perfect.
8/16: The girls don't care if it's raining. They're still game for hiking. Tinker is getting a bit better about pulling and jumping. Both can get highly excited when they see their harnesses, making it challenging to get them dressed prior to our outings.

Our beloved Cooper #goldenretriever arrived this morning. We haven't seen him in a while and we celebrated by doing a bit of off lead obedience as that helped him calm down a bit. He's at his best when performing. Once he settled, I put him in his suite and later into the play yard with Ginger, Otto, Ollie and Kiwi.
8/1: Cooper enjoyed his hike yesterday. Meanwhile, he's out in the yard with some dogs to play with, though he doesn't really race around with them. He's always wanting to be with me instead so he remains at the windows where he can follow where I go.
8/4: Cooper had a fun hike with Ginger today. He's able to be off lead most of the time as he always comes when called, checks in and remains nearby. At one point he thought about going up the mountain, as he caught a scent. But, he redirected quickly on cue. Good Boy!!!
8/11: Cooper has been enjoying his hikes. He also enjoys playing with the other dogs in the yards. His current friends are Bella and Otto. He's still fence barking at dogs on the other side but will stop when I tell him to do so.
8/13: We had a fun hike today. Cooper loves his off-leash hikes and behaves beautifully. He's been good with some of the other dogs; not a bully or snarky. Just a very sweet and good boy all the time.
8/16: Cooper has been a great boy. We enjoy our hikes together and he's very reliable about remaining nearby and coming when called. We also work on his stays along the way. He loves to perform.
​

Ginger arrived yesterday (8/16). Today she went on a hike with her buddy, Cooper. She had to remain on the lead as she has a penchant for walkabouts up the mountain. She enjoyed herself anyway as it's still an interactive activity.

Otto, #shnoodle, arrived yesterday (7/18). We did some off lead work in the front yard to see what he knows. Turns out it's quite a lot. He can come and sit, down and sit for attention. We worked on some heel and sit as a new behavior pattern.
7/19: Great lesson today. We worked on lead at the grassy training area. His heeling was already pretty good, so we began working on stays, with both the sit and down. He has a long attention span. As he kept "throwing" behaviors at me I started guiding him into some tricks. He quickly picked up on speak. Then I taught him twirl, sit up, roll over, and shake, too. Otto is quick to learn and highly motivated to do so.
7/24: Otto had a great lesson with his peeps on Saturday. They worked on heel, sit, down and come. Otto showed off his tricks of twirl, sit up, speak, roll over and shake. We are being very particular about his positioning in heel and recalls as his peeps intend to show him in the future. Otto made friends with a weekend visitor - Kensey, a Westie. The two of them chase each other around the yards using their terrier voices.
7/27: Otto has gradually improved his obedience routines. Yesterday was a bit challenging, though, as he wanted to sniff everything. Lots of redirection required! Today I started him on some agility. He learned pause table, dog walk, weaving around cones, going under 3 tires and to go into the doghouse on cue. He loves it!
7/30: Otto had a nice lesson with his peeps today. We worked on his heel, sit/stay, down/stay, come and finish. We also showed off all his great tricks. One of our main routines with this guy is assuring that he performs with exactness. He's going to be shown in performance and must learn straight sits, heeling, etc. His peeps need to learn lots, too. Not only do they need to digest all the basics, but also all my handling specifications in order to ensure success in the show ring with Otto.
8/1: Great lesson today. I was able to move all the way around Otto at the end of the 6' lead during both sit and down/stays. He also performed nice recalls from that distance. His new tricks of the day are crawl and sneeze. The crawl was an easy one. He's still figuring out the sneeze as it's so close to speak.
8/5: Otto had a good lesson with his peeps yesterday. They were very impressed with his new skills. Besides working on his long distance stays and comes, we also worked more on his tricks. We got started on another new one today - touch target. He was a bit shy about it at the start, but it didn't take him long to understand to touch the round ball on the end of the stick when cued with - Touch.
8/11: Otto is doing really well. I'm able to work with him with a dropped lead most of the time. And, while his barking can be very annoying, he will stop when told. He also automatically sits when I come near. He used to jump up incessantly. Now he knows he'll be rewarded for sitting. He plays well with the other dogs and is improving on distraction work.
8/13: Otto has learned how to perform next to other dogs who are vying for attention, too. He's patient and remains in his sit until he's rewarded. Meanwhile, he's doing very well with his obedience on and off lead and his tricks, too.
8/16: Otto can sometimes be snarky with other dogs, but they mostly put him in his place. If he does so when I'm around my verbal cue of "stop it" is usually enough to get him to calm down. It also works when he's barking excessively. He's performing well with the lead dropped during most of his lessons. Otto does prefer performing his tricks, though. He's now doing a Feet Up and Stay, as well as Touch wherever I move the target stick.

Toby arrived today for a week visit. While here he'll be getting daily walks in the woods and fields. He's already made friends with Lucky, Bella and Tinker.
8/13: Toby went on his hike with Albus this morning. He does pull quite a bit, so next hike he'll be wearing a Freedom Harness.
8/16: Not only is it easier to get the Freedom Harness onto this excited, wiggly dog, but he has stopped pulling hard, too. He loves his hikes and enjoys hanging with Bella and Tinker. 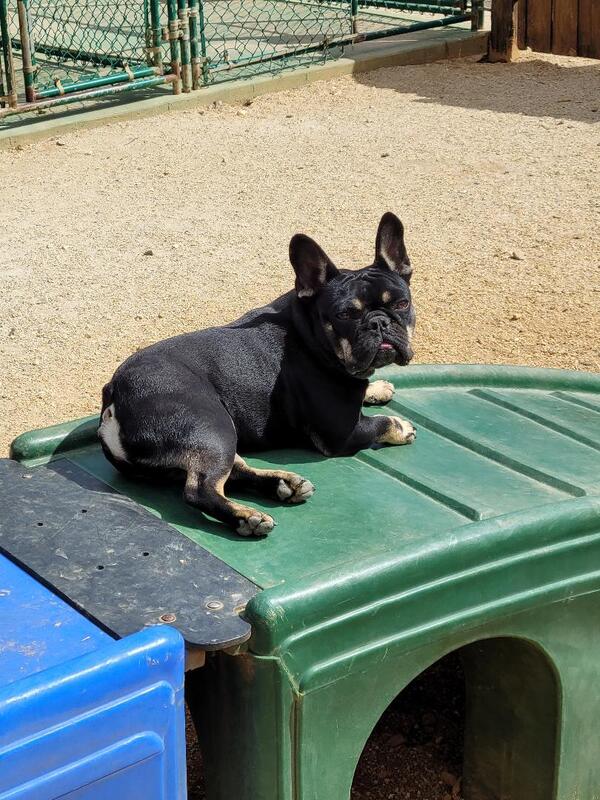 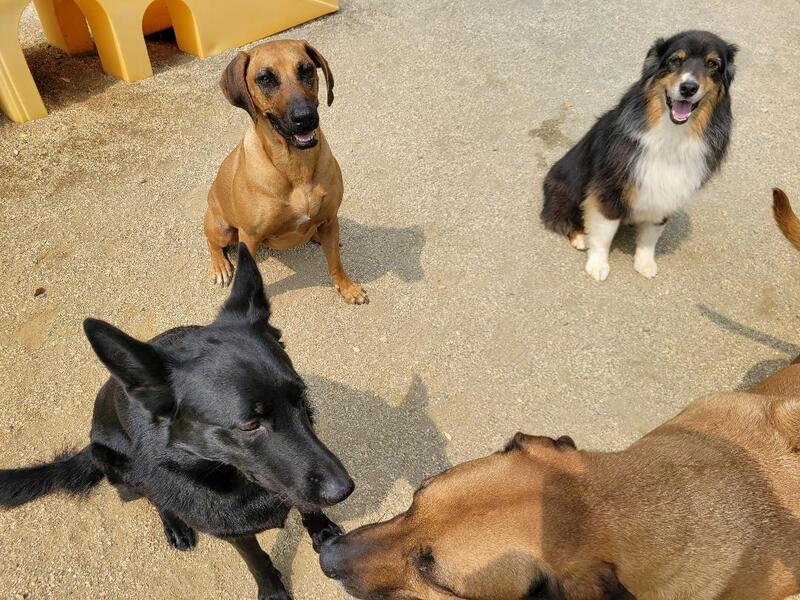 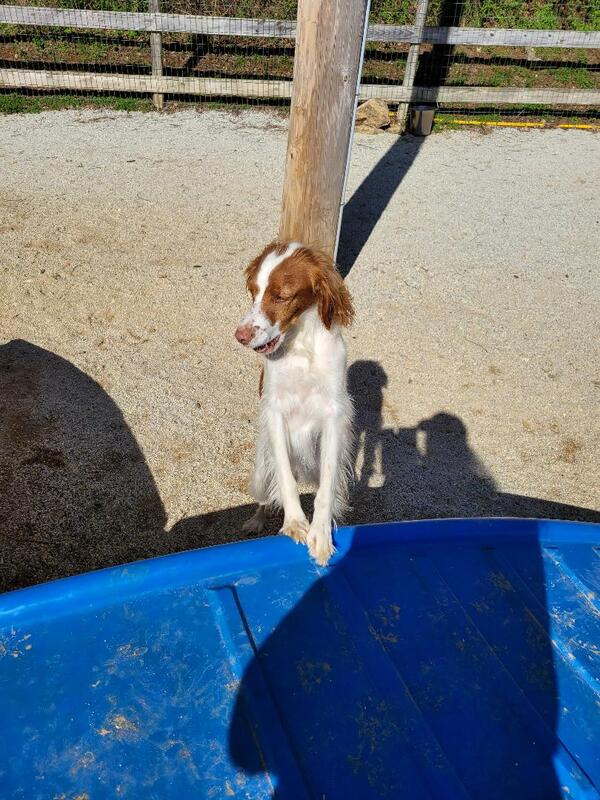 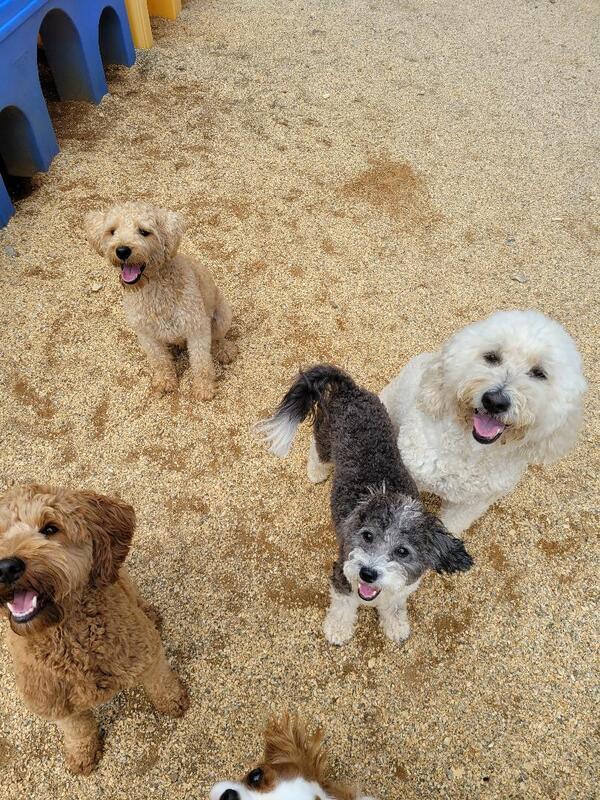 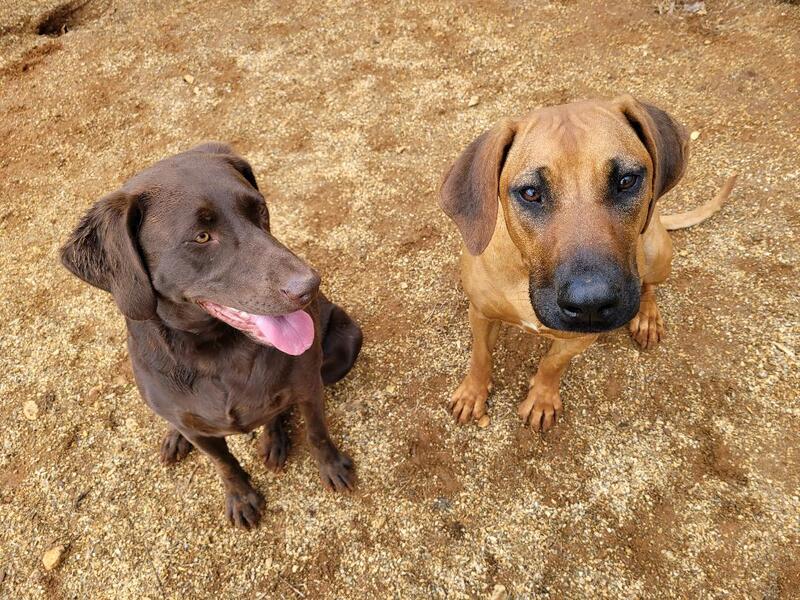 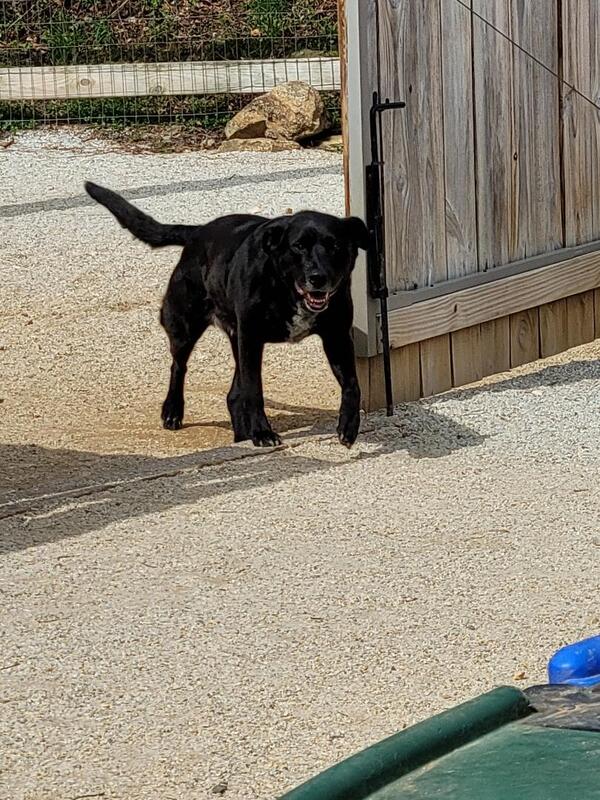 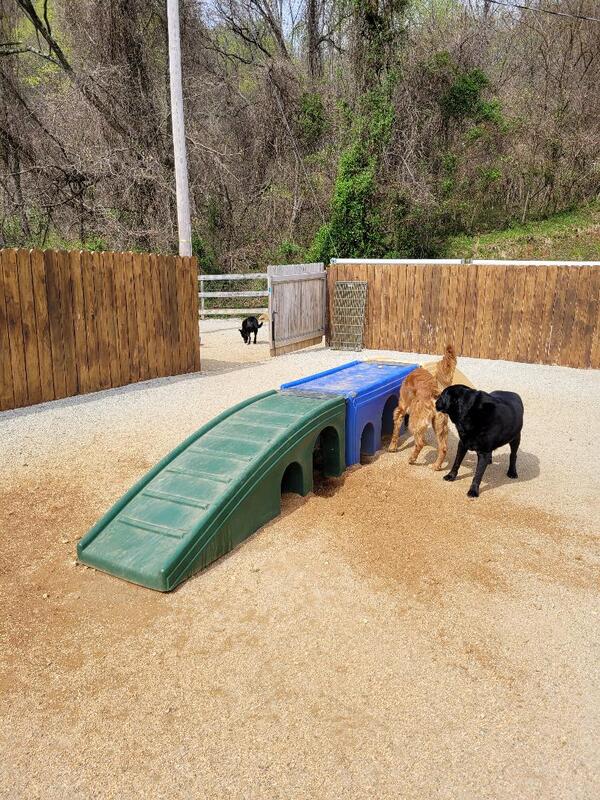 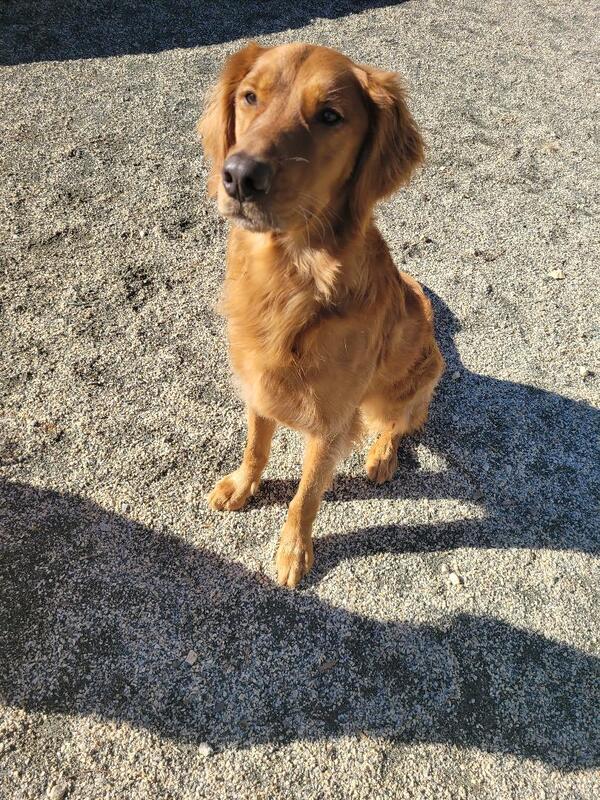 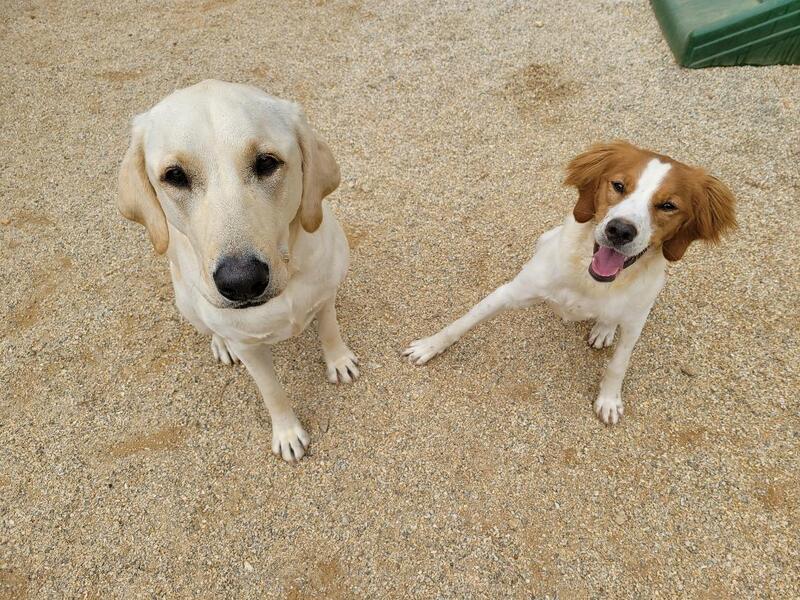 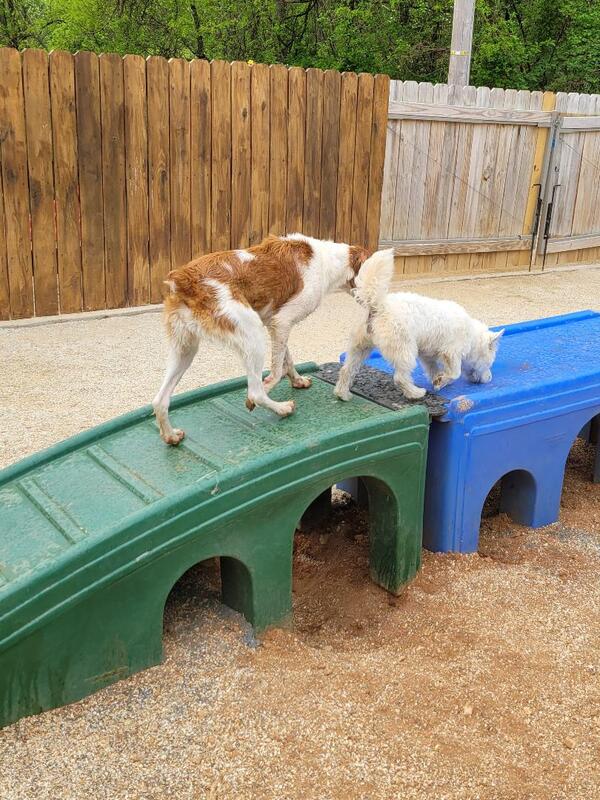 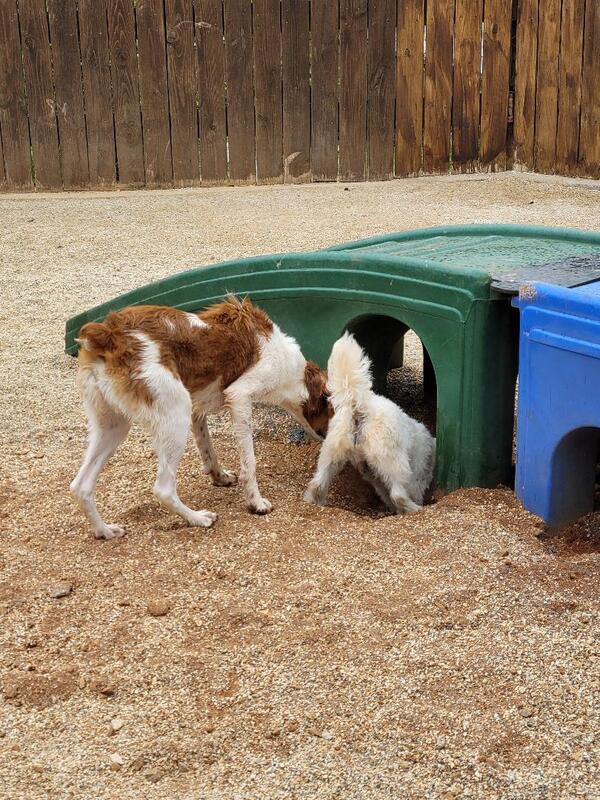 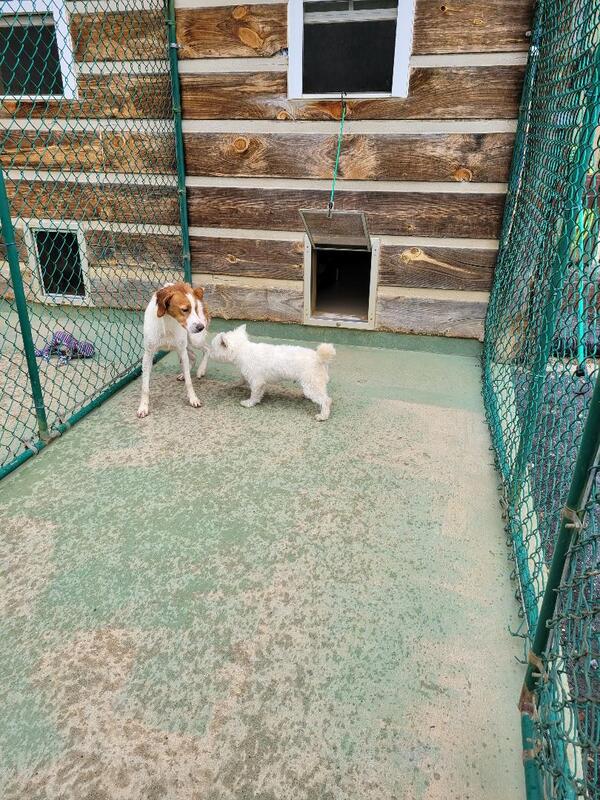 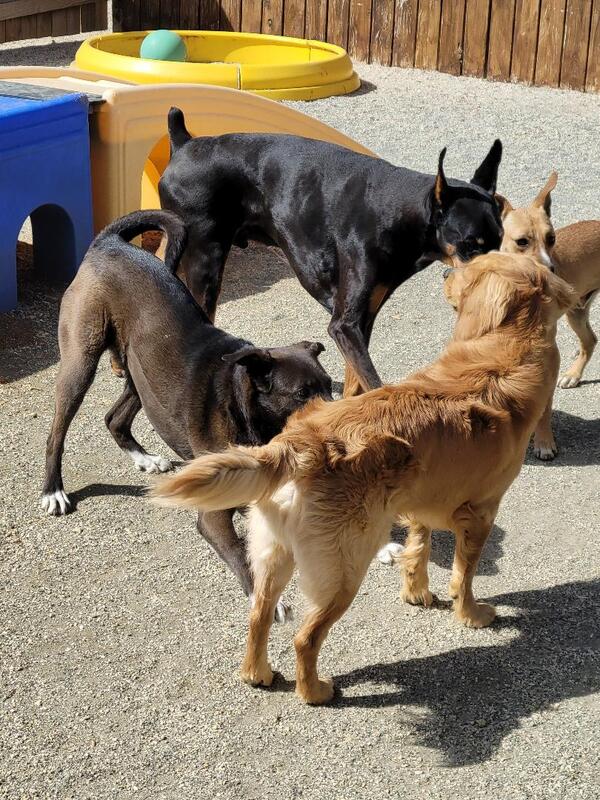 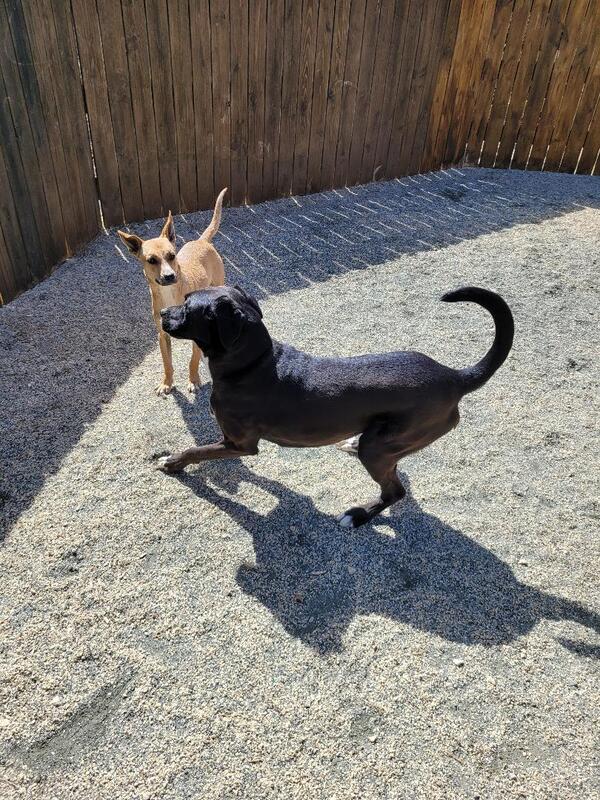 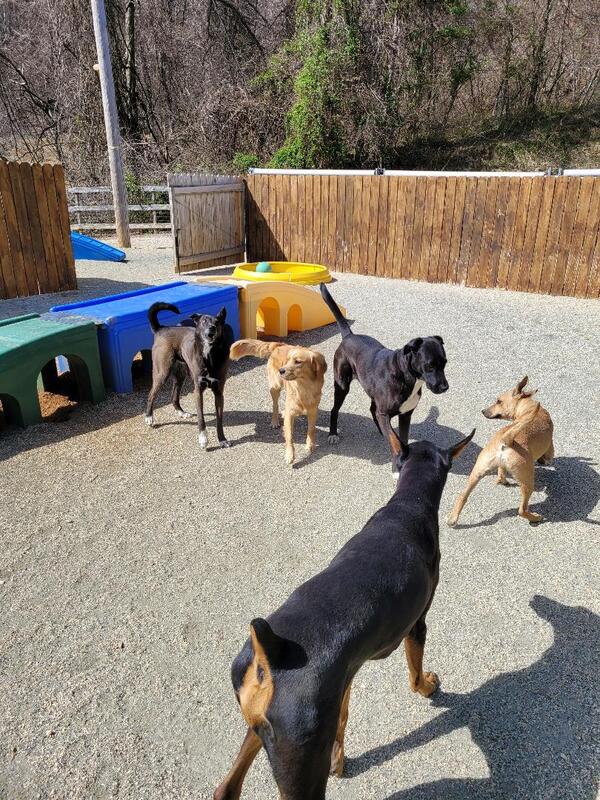 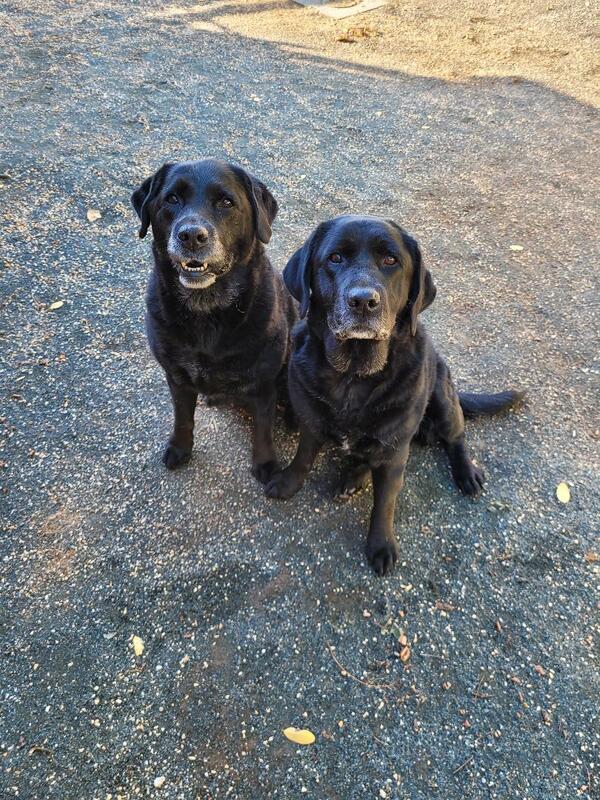 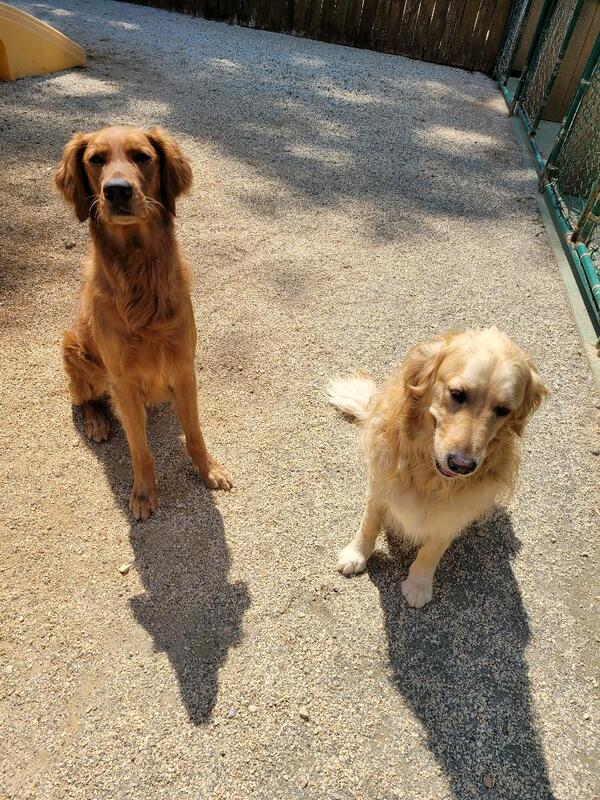 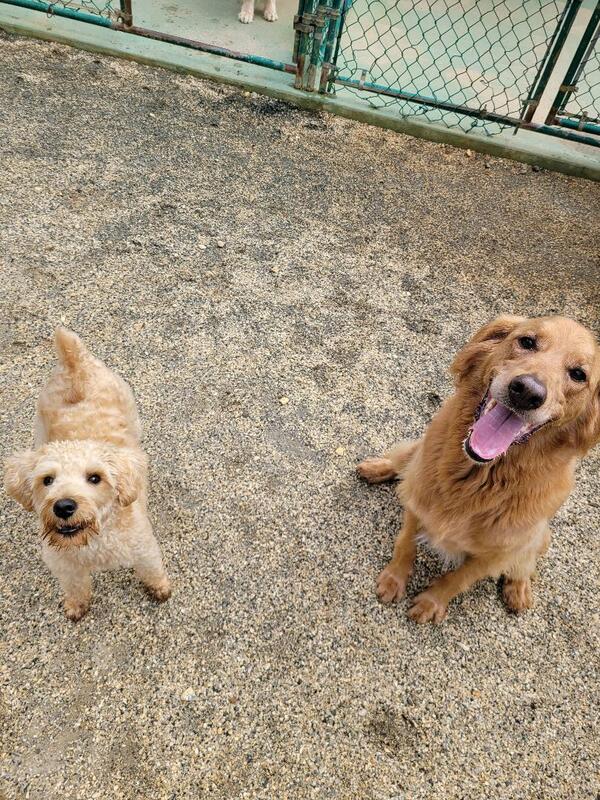 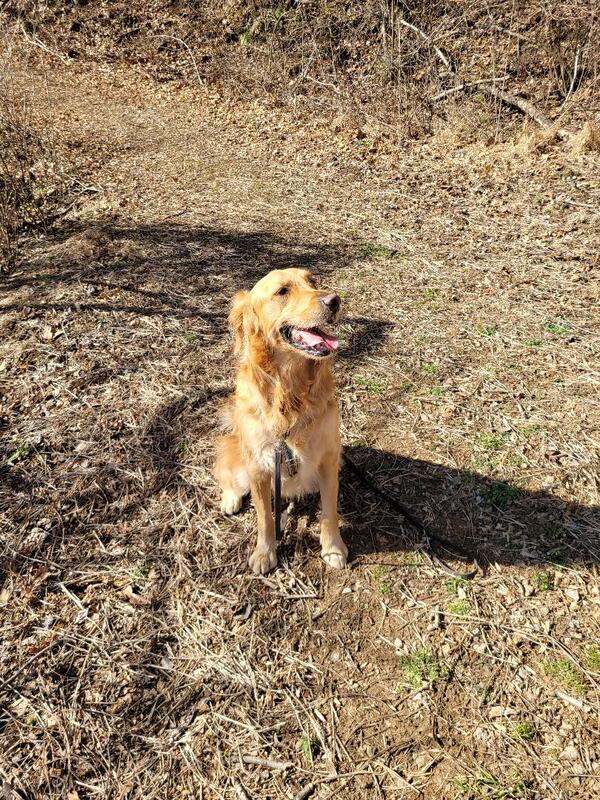 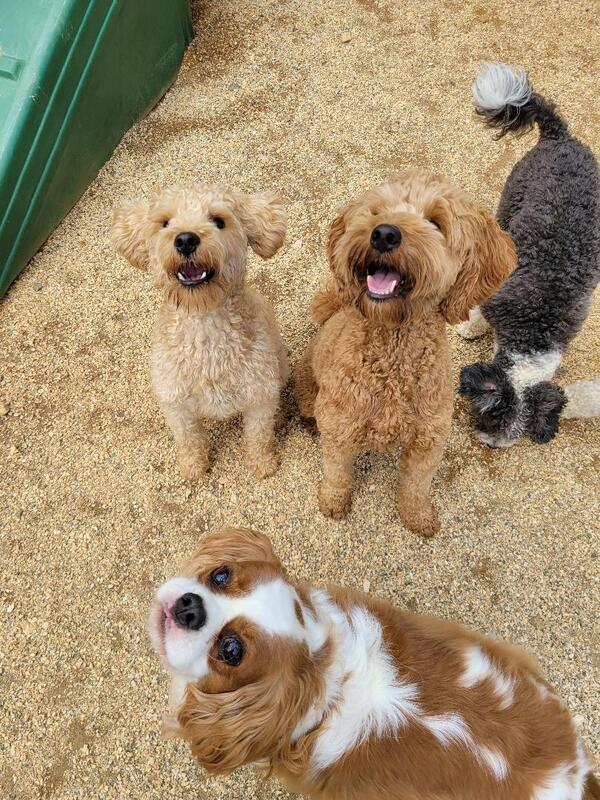 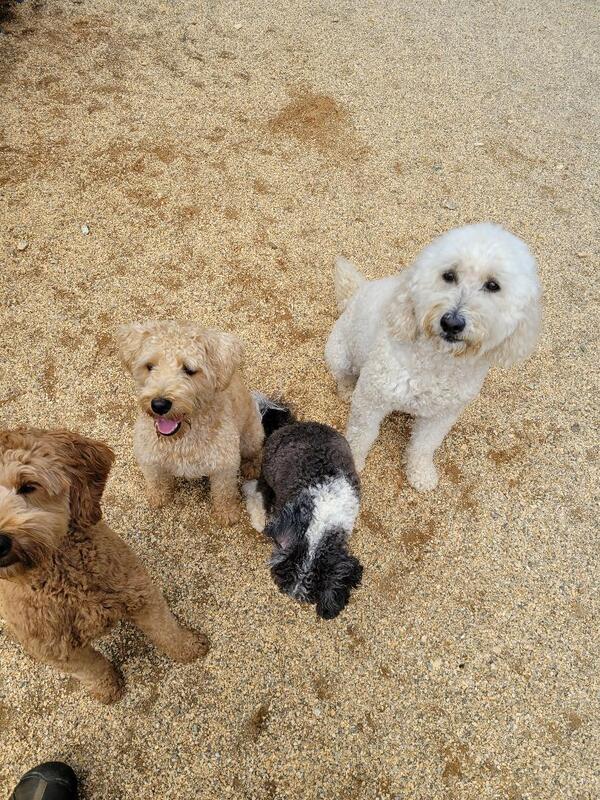 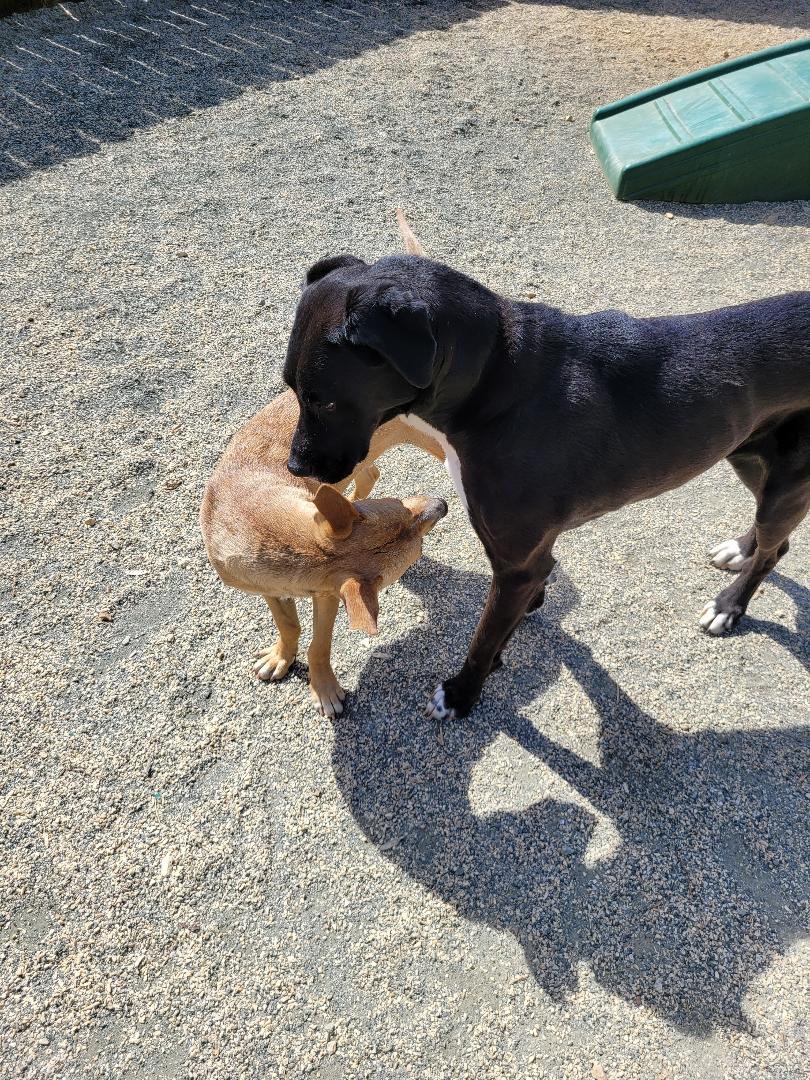 Shady Mountain Pet Retreat uses Kuranda dog beds in all of our suites. They have sizes for every dog made of highly durable and easy to clean materials. This is the ONLY chew proof bed on the market that dogs find 100% comfortable. They also have washable plush mats that adhere to the hammock beds for more warmth and comfort. If you are looking to purchase a dog bed this is a product that is more than worth the expense as it lasts forever. Click on the link below and get 10% off!!!